Triumph of the egg

Until he was thirty-four years old he worked as a farmhand for a man named Thomas Butterworth whose place lay near the town of Bidwell, Ohio. He had then a horse of his own, and on Saturday evenings drove into town to spend a few hours in social intercourse with other farmhands.

In town he drank several glasses of beer and stood about in Ben Head's saloon-crowded on Saturday evenings with visiting farmhands.

Songs were sung and glasses thumped on the bar. At ten o'clock father drove home along a lonely country road, made his horse comfortable for the night, and himself went to bed, quite happy in his position in life.

He had at that time no notion of trying to rise in the world. It was in the spring of his thirty-fifth year that father married my mother, then a country schoolteacher, and in the following spring I came wriggling and crying into the world.

Something happened to the two people. The American passion for getting up in the world took possession of them. It may have been that mother was responsible. 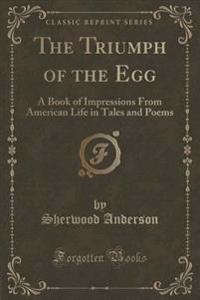 Being a schoolteacher she had no doubt read books and magazines. She had, I presume, read of how Garfield, Fin coin, and other Americans rose from poverty to fame and greatness, and as I lay beside her-in the days of her lying-in-she may have dreamed that I would Some day rule men and cities.

At any rate she induced father to give up his place as a farmhand, sell his horse, and embark on an independent enterprise of his own. She was a tall silent woman with a long nose and troubled gray eyes. For herself she wanted nothing.

For father and myself she was incurably ambitious. The first venture into which the two people went turned out badly. They rented ten acres of poor stony land on Grigg's Road, eight miles from Bidwell, and launched into chicken-raising.

I grew into boyhood on the place and got my first impressions of life there. From the beginning they were impressions of disaster, and if, in my turn, I am a gloomy man inclined to see the darker side of life, I attribute it to the fact that what should have been for me the happy joyous days of childhood were spent on a chicken farm.

One unversed in such matters can have no notion of the many and tragic things that can happen to a chicken. It is born out of an egg, lives for a few weeks as a tiny fluffy thing such as you will see pictured on Easter cards, then becomes hideously naked, eats quantities of corn and meal bought by the sweat of your father's brow, gets diseases called pip, cholera, and other names, stands looking with stupid eyes at the sun, becomes sick and dies.

A few hens and now and then a rooster, in' tended to serve God's mysterious ends, struggle through to maturity. The hens lay eggs out of which come other chickens and the dreadful cycle is thus made complete.

It is all unbelievably complex. Most philosophers must have been raised on chicken farms. One hopes for so much from a chicken and is so dreadfully disillusioned.

Small chickens, just setting out on the journey of life, look so bright and alert and they are in fact so dreadfully stupid. They are so much like people they mix one up in one's judgments of life. If disease does not kill them, they wait until your expectations are thoroughly aroused and then walk under the wheels of a wagon-to go squashed and dead back to their maker.“The Triumph of the Egg” is a collection of stories and poems by Sherwood Anderson.

Abandoning the interconnected quality of his more famous “Winesburg, Ohio,” the author adopts a variety of perspectives and settings while exploring similar themes: personal growth, disillusionment, loneliness, and .

The triumph of the egg ( edition) | Open Library

“The Triumph of the Egg” is a collection of stories and poems by Sherwood Anderson. Abandoning the interconnected quality of his more famous “Winesburg, Ohio,” the author adopts a variety of perspectives and settings while exploring similar themes: personal growth, disillusionment, loneliness, and urban-rural contrast.

The Triumph of the Egg (full title: The Triumph of the Egg: A Book of Impressions from American Life in Tales and Poems) is a short story collection by the American author Sherwood Anderson. It was Anderson's third book to be published by B.W. Huebsch and his second collection after the successful short story cycle Winesburg, ashio-midori.com: Sherwood Anderson.

“The Egg” tells the story of a childhood memory that has in a profound way shaped its narrator’s moral outlook. The tale centers on the narrator’s father, a .

Jan 18,  · An antidote to a faceful of sleet, it’s hot and sweaty all day long on City Room. This article first appeared on July 6, The tuna was our fallback. Even if we proved unable to fry an egg on the sidewalk on the hottest day in the city since , we hoped we could at least sear a piece of.

Read Triumph Of The Egg, And Other Stories Light Novel Online